A list of films for skateboarders to get motivated

We have witnessed a new era of the skateboarding-based films on our screen. To name a few, in 2018, we had a debut film named Mid90s - a coming-of-age comedy-drama film written and directed by Jonah Hill and Minding the Gap -  a documentary film directed by Bing Liu.

There are more and more movies that are inspired by the stories about the skateboarding. The filmmakers created the first movies 50 years ago. Among those, “Skaterdater” is considered one of the earliest example which is a 15 - minute short film without conservation.

Skating or sidewalk surfing was known a long time ago but then almost became to lost its stance as a temporary trend until 1970s when the polyurethane wheel was invented and facilitated the skateboarders to pass bigger and tougher terrain. As a result. skateboarders including Tony Alva and Jay Adams in legendary Z-Boys Skate crew embarked to record their movements by camera and consequently, a mass of 70s skate-based film were born. Many years later, mainstream movies showed up with the main characters being skateboarders since the skateboarding became an iconic sport of youthfulness and rebellion.

Here are a list of 4 greatest skateboarding film we recommend you. We also hope that with the motivation and inspiration you get from these films, accompanying by the techniques in our previous Skateadvisors articles, you can become better and better at this challenging sport.

Skate Kitchen is definitely an ode to superbly acclaim the positive sides of skateboarding and skate culture as well. At the beginning of the film, Camille, a Long Island skateboarder suffers from an unbearably painful skate injury between the legs.

She is condemned to stop skateboarding. However, after her injury healed Camille starts to go back to play skateboarding. She also follows group skaters on Instagram who have the same mindset as hers.

The film covers appealingly shot Steadicam sequences of Camille skateboarding through the streets, performing the pleasure of freedom, light-hearted delight that can be experienced from simply rolling around on the skateboard.

Before starting shooting, Camille spent her time having meetings with the girls for a year. Many conversations in the film are built on their real talks and interview. In their mindset, the skateboard is not mere wood and wheels, it is a way of life.

In addition, if you do not expect to, unfortunately, have a serious injury when playing skateboard, start by paying attention to your quality of skateboard, for example, let begin with "what size skateboard wheels do you need" at Skateadvisors and the other tips. 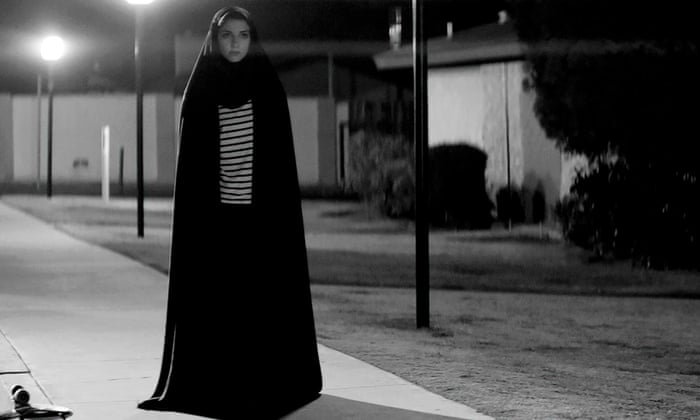 In an interview with the Guardian about her debut film, Ana Lily Amirpour - the Iranian - American filmmaker of A Girl Walks Home Alone at Night was brought back to her teenage recollection. She said in the interview, “I was not girly enough to play with the girls so I took up skateboarding.

The film is portrait in the gloomy night time street of a fictional Iranian town named: Bad City”. A female vampire credited only as “The Girl” is stalking her target. When she faces a young boy standing on a skate, however, she does not drain his blood as usual.

Instead, she threatens to “feed his eyes to the dogs” and then steals his board. Her supernatural power is strengthened as she rides away on the stolen wheels and all but flies across the sidewalk and keeps looking for the midnight preys.

In the 70s, Stacy Peralta unbelievably did perform miracles on aboard. In the early 80s, his skateboarding career once again stood out by his decision to create The Bones Brigade, a team of terrifically talented young skateboarders. The Brigade embraced the most creative skateboarders who were Tony Hawk, Lance Mountain, Steve Caballero, and Rodney Mullen.

Among all team members’ stories, Mullen’s presumably is the most touching one to the audience. He delivered the details about the way his father persistently objected to his passion for skateboarding and nearly prevented him from continuing his career, also the way he managed to overcome his anxiety and an eating disorder throughout his teens and 20s.

Legendary skater Stacy Peralta’s documentary Dogtown and Z-Boys describes a story of how the skateboarding, from California surfers’ thing to do when the waves were flat to becoming the well-known hit an Olympic sport today. Narrated by Sean Penn, extraordinary archive scenes alongside testimonials from Peralta’s influential 70s skate team,  the Z-Boys, hailing from Venice Beach, California (popularly known as Dogtown).

The documentary manifests how Peralta with others including Jay Adams and Tony Alva went beyond their possible limits. Due to the severe droughts in the 70s which led to the drainage of the backyard swimming pool, Peralta and his friends seized the chance to take advantage of these spaces for skateboarding. These early skaters did not receive the appreciation from the owners of the pools and even had to run away from the local authorities.

Four years after this film, Peralta has the intention to turn it into a fictional version in the Hollywood film Lords of Dogtown, which was released by Twilight director Catherine Hardwicke.

The inaccurate stigma of skateboarding